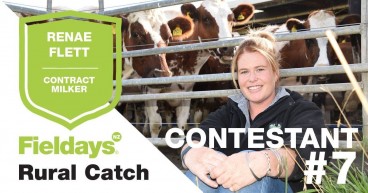 We look forward to hosting our customers on the Blue Pacific Minerals site E80-82 at Mystery Creek Hamilton 13-16 June.

StockRock customers, make sure you call in and have a coffee and cake with us out of the cold. Take home your own day-glo StockRock T-shirt (if you like them!). We have mens and womens sizes to give away. Also enter our massive $8000 farm race upgrade promotion. Its easy to enter, simply fill in an entry form on site to be in to win. See the StockRock website for more details. Competition closes end of National Fieldays

The Blue Pacific Minerals Fieldays site will also display our range of animal health products. Now calving season is nearly here, find out about OptiGuard, the premium scour prevention product for calves. It has had fabulous feedback from customers and is available exclusively through your local vet clinic.

WIN one of 3 trips on us when you order one tonne from either of the new Maximin products range. Maximin products are designed to supply key minerals in a rumen dispersible granule to meet most NZ dairy herd supplementary mineral requirements - from post-calving (not pre-calving) and for the majority of the season.

Also check out Renae Flett our very own OptiGuard ambassador who has been picked as one of the four women finalists for the Fieldays rural catch competition! This was previously the rural bachelor competition but now includes 4 girls and 4 guys so is now called "Rural catch". All your support would be greatly appreciated so if you can head over to the Fieldays facebook page Fieldays and check out the rural catch comp, like the photos and once the "Peoples Choice" is up please give Renae a like/vote.
Renae will hopefully be around the Blue Pacific MInerals site on Saturday afternoon (16th) after the rural catch competition is finished so come say hi. 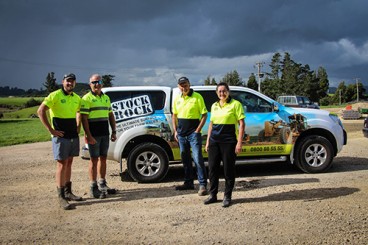 CD Fieldays in mid-March generated a record number of quotes for the Taranaki and Manawatu regions, so Shane has been busy getting through these quotes and site visits. If you would like a no-obligation quotation for your farm race upgrade, then now is a good time to catch him while he’s in the area.

Gearing up for CD Fieldays We look forward to seeing you at Central Districts Fieldays in Feilding this year. Take a note of the dates; 15-17 March, site no. 071. Make sure to call in and arrange a no-obligation evaluation of your farm race. And while you are on site, enter our massive 2018 $8000 farm race upgrade promotion. Just fill in an entry form on-site and be in to win, Farmers, let us help make your life better!

Upgrades at the NGAKURU QUARRY 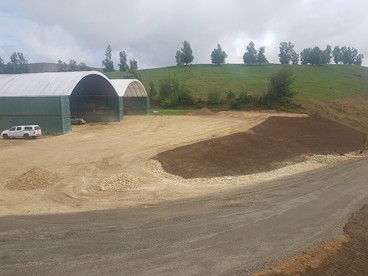 Starting the week before we knocked off for Xmas, working through the Xmas break and through into mid January, the StockRock crew have been at the Ngakuru Quarry upgrading the roads. Shane and his team have upgraded the haul road into the quarry, upgraded the drainage and installed cattle stops for easier access for trucks and trailers. The new StockRock storage shed is also scheduled to start construction soon and be completed by the end of February. This will hold an additional 7000 tonnes of StockRock. StockRock customers! From Shane and the team: (from back left - Glen, Kuk, Paul, Bevan, Sandy, Bruce, front row - Shane) thanks for your business this year. We have had a great year, National Fieldays is always a highlight, as was getting some new machinery to work with and of course helping farmers in really challenging times is what makes the job really worthwhile. Its official - Spring is here! As if we need more rain… It is fair to say that we have had the most difficult year on record for the most challenging periods to get StockRock laid on farms. 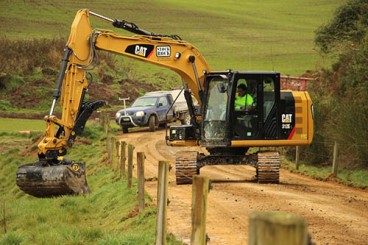 Unbelievably difficult summer, autumn and winter weather for dairy farmers has had a hugely detrimental effect on farm races all over New Zealand. Thank goodness we have managed to provide clients with StockRock from our fantastic storage sheds. Without these oversize facilities we would have struggled to keep Rock going out the gate. 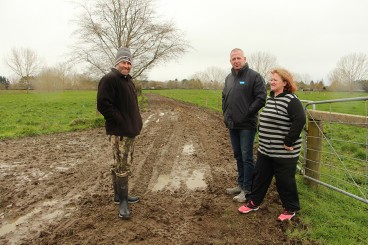 CONGRATULATIONS to our StockRock 2017 promotion winner Karen Dysart who works for Zane Kite at Kiteroa Ayrshire farms in Ohaupo. Karen has won an $8000 farm race upgrade. Karen entered the StockRock competition without telling her boss Zane, so he was pretty surprised and thrilled to have won. He heard the promotion on the radio and thought it would be a cool thing to win but hadn't entered himself. Congratulations Zane and Karen we look forward to working with you over the coming months and upgrading your farm race.

Winner will be announced soon We had a huge number of very compelling entries in our StockRock $8000 farm race upgrade competition. We are currently collating the entries and will notify you soon who has been drawn the lucky winner. Thanks very much for participating.