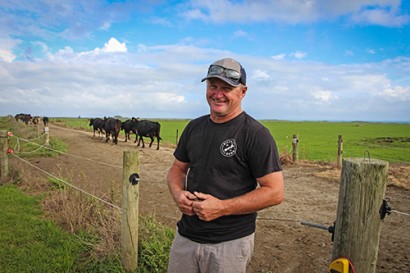 When asked why he would recommend StockRock, Gavin answers the reason is solely that it works! “There is no other product that allows us to use it as we need it. It solves our problems.” 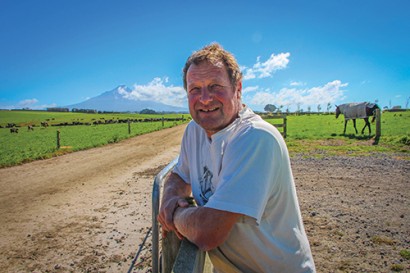 Mark Muller milks 550 cows on 177 Ha in South Taranaki. He started using StockRock about 6-7 years ago when he first met Shane Smith of StockRock at the National Fieldays. Mark was fed up with the local fines he was using as race materials being washed away on his farm race. “It was always muddy for the first 100 metres coming into the cow shed,” he says. “This race (photo above) has been down for 6 years and it is just starting to need maintenance work now. “Its lasted well. StockRock is pretty good stuff. It’s the best its ever been on this part of the race”. Ian Upson (farm owner) with sharemilker Kate Bedford who
milks 170 cows on 50Ha in Ngarua, Waikato.
We asked Kate what she likes about using StockRock. Here’s what
she had to say: “Everything! I like the fact the cows are happy to
walk on it. When the race is not StockRock, they walk single file,
whereas on the StockRock areas they spread out all over it.
The benefits we find using StockRock are that we definitely notice
a decrease in lame cows and the cows walk faster to the shed. Also
less stones and mud are going into the shed. We enjoy the fact it’s
so low maintenance. You can even take a push chair over it! Haha
(that’s handy when you have small kids)”. "Farmers find it hard to obtain decent brown rock
around here so we were looking around for other
materials we could use. That’s when we found
StockRock. What I like about using StockRock is
knowing that when you lay it down, you can have
confidence it is going to hold up. It’s going to be there
for the duration.
At the end of the day when we suggest to farmers that
they try StockRock, 9 times out of 10 they come back
and want more." 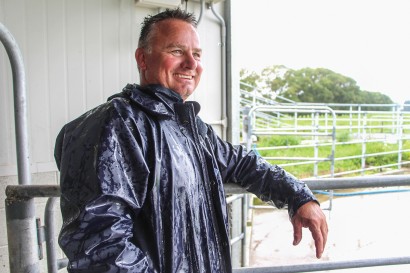 Bruce milks 300 cows on 100Ha East of Morrinsville.
“Why did I buy StockRock? Well over the years I have tried several different race materials but I wasn’t happy with the number of lame cows we were getting, or the durability of the rock used, so I started looking around for a better solution. Then I came across StockRock.

Initially we started with a few hundred metres out from the cowshed and were so impressed with the results we just kept extending over the years. I would recommend farmers use StockRock because it works, it lasts well and it's great on cows feet. Happy cows make more milk. While the upfront costs are higher, the benefit is that it lasts longer.” We caught up with Ken on the StockRock site at National Fieldays this year. Ken works the family farm with his son, farm manager Dean, milking 440 cows on a 170 ha property in Cambridge. 3 yrs ago they first tried using StockRock for a 50 metre area outside the cow shed and stand-off pad. Now they are just waiting for Shane to turn up so they can extend StockRock further along the farm race. Henry VanderHulst milks 300 cows on a farm he bought in 1989. Fed up with continually repairing a high traffic part of the farm race, (spending $5-6000 a year) he tried his first load of StockRock in 2011. Neville Adams meets on a sunny afternoon up in the back blocks of Tokoroa. He gets straight to the point, “I’m really busy, the only reason I agreed to see you right now is because its bloody good shit!" Matamata based Mike Luxford is a contractor too busy to be bothered with advertising. Word of mouth ensures the business, which consists of himself, a full time employee, along with his dad working as a sub-contractor, -  are busy year round. 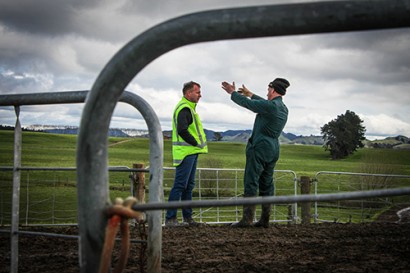 Theo van den Broek tells us he came out of retirement to manage the 280Ha dairy farm he has run in Reporoa for the last 8 years. One of 5 workers on the farm, this operation is now a 100% winter milking farm with the calving date subsequently more aligned with pasture quality.