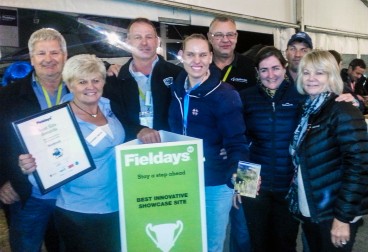 StockRock impressed both the crowds and judges this year at the 2016 National Fieldays in Hamilton over the weekend where we were awarded ‘Best Innovative Showcase Site’ award from a competitive field of over 1000 sites.

National Fieldays just around the corner 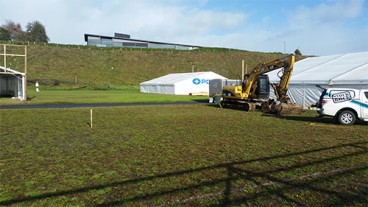 Here's the blank canvas - but watch for the transformation to come!

Check out the parents

Did you know that StockRock is made by Blue Pacific Minerals? Its been a huge undertaking and taken over 8 months to complete, finally a new BPM website has gone live. Check out the new look at www.bpmnz.co.nz

See you at CD Fieldays Coming up next month is the Central Districts Fieldays in Feilding on the 17-19th March. StockRock will be located at site 071, which is the same position we have had at the Fieldays for the last couple of years. If you are going to be there, its a great opportunity to have a chat with me about “how” and “why” we can reduce large numbers of lame cows on your farm and increase the cow-flow
to your cow shed. So do call in, I look forward to catching up.

The big summer job ahead is to fill the sheds with StockRock and Raw Zeolite for the refinery before the weather changes, so we have plenty of dry material stockpiled come the busy winter months The CAT 330D breaks the Raw Zeolite from the quarry face and breaks up the big boulders ready for the Crusher.

Our latest job in Pirongia district. Very impressive dairy farm set up. This undercover building for the cows is called a mootel. In this job the base rock the farmer had laid one year ago continued to breakdown which meant the cows carted a huge amount of stones that were getting tracked on to the cowshed yard.

Shane usually writes the news blog, but he’s busy Facebooking, - not such a bad thing apparently, according to the Herald newspaper (Sept 2 2015). Scientists have concluded that ‘50’ is the new ‘42’, after discovering that the brains of middle aged people are getting sharper and “younger” to keep up with the demands of modern technology. Shane has been chomping at the bit for months now, wanting to get a Facebook page for StockRock set up, which we have, check it out.

The Winner of the StockRock Fieldays Competition is ...
MARK WILSON  from GREEN GRASS 2003 LTD located in Taupiri, Waikato.